I apologize for not posting in nearly a month. I've been concentrating on a big mid-term paper that was due last week, and more importantly- my upcoming nuptials that will take place this coming weekend. We'll be going to Mexico for our honeymoon so I promise to post about our trip soon after we return.

In the meantime, I'll leave you with this short write-up of my recent explorations on the Shelby Bottoms/McGavock area greenway. Last week, I bought a hybrid bike that can be used for mountain biking or road biking. Just about every other day, I've been peddling back and forth between Inglewood and East Nashville via the Shelby Bottoms greenway. This is an easy 6 mile ride that is relatively flat and meanders along the Cumberland River. It really is a nice afternoon ride.

However, this weekend I decided to do some exploring, and Brian and I crossed the new pedestrian bridge over the Cumberland River and rode through Two Rivers Park, past McGavock highschool, and on to Ravenwood country club where the greenway meets up with Lebanon Rd. near Kohl's in Hermitage. The stretch between McGavock and Ravenwood is so beautiful and its hard to believe you're in the middle of Davidson Co. The trail takes you past rolling farmland with cows, and the point where the Stones River enters the Cumberland. This part is also the most challenging to bike due to the rolling terrain. My goal is to make it up the hills without huffing and puffing like I did yesterday. All in all, it was about an 18 mile ride and I was exhausted at the end of it. I can't wait until I build up the stamina to ride all the way from my house to Percy Priest lake!! I'm so lucky to live near such a great greenway.

I'll leave you with some earlier photos I took of the pedestrian bridge that crosses over to Two Rivers Park. 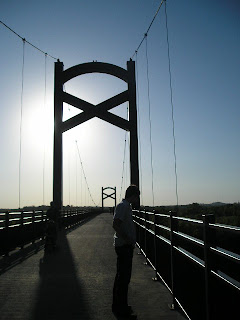 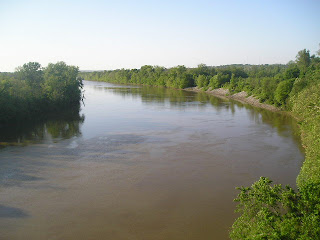 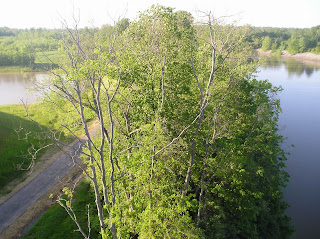 So what do booby punch and Old Hickory Lake have in common? Absolutely nothing. Unless you spent the weekend with me, however.

Thursday afternoon the wonderful people at my work held a bridal luncheon and shower for me. A couple of us ladies went to lunch at The Standard at the Smith House, Nashville's only remaining townhouse from the 1800s. Built sometime in the 1840s, the Standard originally operated as a boarding house and later as a Social Club. Nashville's first bowling alley was built underneath the ballroom sometime in the late 1800s. While we were there, our waiter pulled a nearby table away from the floor and we saw the outline to a trap door that supposedly served as a secret passage for the Underground Railroad. Lots of history abides in this house and the food is tasty as well. I especially loved the mini biscuits they brought out before the main course. 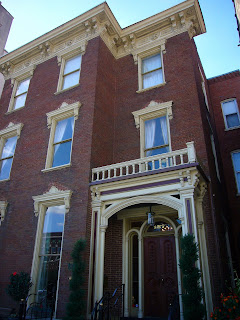 After the meal, my coworkers and I headed back to the office where they had cake and punch waiting for me. My supervisor had planned to make a punch ring, but wasn't able to find the mold and ended up using muffin cups to freeze a maraschino cherry and create decorative ice cubes. Unbenownst to her, the ice cubes ended up looking very much like breasts floating in the punch. Hence the newly christened name, booby punch. The look on my male coworkers' faces as they viewed the punch was priceless. 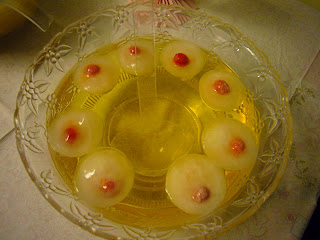 On Saturday, Brian and I decide to head over to Mt. Juliet to go boating on Old Hickory Lake with my parents. Created in 1954, Old Hickory Lake is located along the Cumberland River and serves as the backdrop to several famous peoples' homes. Johnny Cash lived on the lake until his death and then his home was bought by former Bee Gee, Barry Gibb. Tragically, the house caught fire during renovations and all that's left is the foundation. We drove past the ruins so that Brian could take a picture. 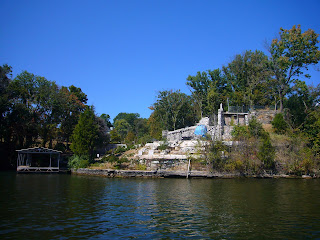 Lastly, Brian decided to get out on the tube for some good ole' fashioned redneck fun. I grew up tubing on the lake so its only appropriate that my future husband be released in the cold waters of the lake and held at the mercy of my dad at the helm. He had a good time. 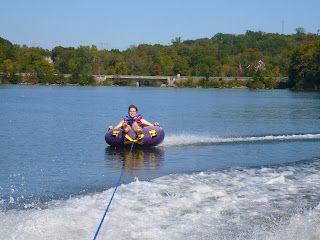