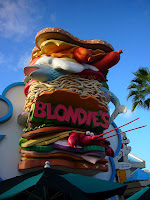 We knew what we were getting into. According to information we found on the internet (which is always correct....) the Saturday after Christmas is THE busiest day of the year for theme parks in Orlando. On our drive down, this information was further enforced after being stuck in horrendous traffic just trying to make it to the IKEA right off Interstate 4. (Side note: Our visit to IKEA consisted of a hurried walk-through of the store while dodging disoriented adults and screaming children). Since neither of us can handle crowds of little more than 5 or 6 people, we decided to spend the night before our theme park adventure strategizing on how we would conquer the rides before the swarms of people descended upon the park. 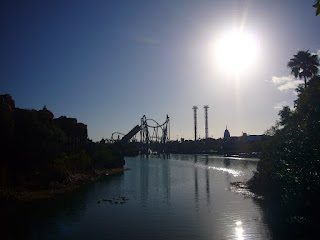 First, we get detailed instructions on which rides to go to first from Brian's brother, who happens to be a huge theme park enthusiast. Next, we wake up while its still dark outside and get to the park by 7:45 (15 minutes before the opening). From there, we basically run from ride to ride with little to no wait and have basically experienced every ride by 11:00. (i should also mention that by this point I look like a sewer rat between the wet rides and Florida humidity) Right before we leave the park, we notice a bridge where you can insert 25 cents into a machine which then lets you aim and fire a water cannon at unsuspecting riders on the raft ride. This was probably the best part of the day- myself, Brian, and a nearby teenage girl even coordinated to fire all the water cannons at once on a group of people. I know- we're horrible people and deserve retribution, but we ultimately get it at the end of the day. 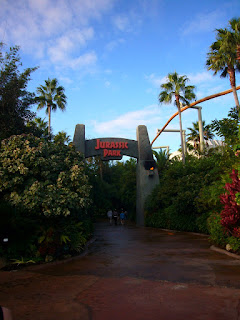 Before we leave the park, we decide to do one last ride that will most definately get us wet. It's a log ride with a huge descent into waves of water. We figure, "what the hell" since we were leaving anyways. The only question was what we would do with our camera/phones. So I stick both phones in my bra (one in each cup) and we use an empty Doritos bag to secure the camera (resourceful, right?). We got absolutely DRENCHED!! As we left the park, we walked against the masses of people just arriving for the day and noticed everyone staring at us since we looked like total freaks with our dripping hair and wet, clingy clothes. Islands of Adventure pales in comparison to Opryland (R.I.P.), but definately had its moments. Overall, it was a good way to recapture our youth for a day.
Posted by Jessica Wilson at 10:41 AM

Email ThisBlogThis!Share to TwitterShare to FacebookShare to Pinterest
Labels: Islands of Adventure