Brian and I decided to finally brave the rapids of the Hiwassee River over the July 4th weekend. We left at the crack of dawn on Friday and drove all the way to the old town of Reliance, TN in the Cherokee National Forest. As we drove into town, we followed an old rickety farm truck full of people getting ready to run the rapids, and I so hoped we would be riding in a similar vehicle, but our outfitter drove us along a scarily narrow road to the put-in spot in an old short bus instead.

Once the bus let us off, we took our inflatable kayaks and foul-smelling life jackets and hopped in the cold mountain waters and prepared for paddling two hours of Class 1,2, and 3 rapids. I’d like to think of myself as a good paddler, but I was not prepared for some of the sheer drops we had to make, and by some stroke of luck I managed to keep from falling in the river. Brian never fell either, but he did get stuck on a couple of rocks jutting out just below the river’s surface, and I got to laugh as he attempted rather violent body movements to wrench himself free from the rocks.

The last rapid we reached, Devil’s Shoals, was by far the most fun rapid I’ve ever run. Waves of water spilled into my boat as the water bucked me up into the air. Those few seconds of terror were absolutely exhilarating! Oddly enough, you can also go down the Hiwassee in an inflatable tube that offers no protection. I was surprised to not see a mass of floating bodies and abandoned inner tubes as we reached the take-out point.

Kayaking the Hiwassee was so much fun that we were depressed to have to exit the river in order to get a ride back to our car. We were the first ones from our group to finish and waited for our short bus as a nearby group of deaf kids excitedly signed over their river adventure. After we dried off and got back to our car, we snapped a few pics of cool, old buildings in Reliance (such as this old school/church below) and made our way home. 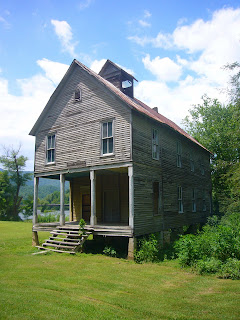