The past couple of months have rained like there's no tomorrow. I guess its really a blessing since Tennessee went through a terrible drought just a couple of summers ago, but it really has put a damper on my spring traveling plans. I've managed to escape the rain with a trip to Charleston, SC (actually it rained while we were there) and Las Vegas, but I'll post on those trips another day. I feel like I need to get back to my roots and write about my travels in TN.
About two weeks ago, Brian and I headed to Oak Ridge so he could compete in a bike race. While he was riding around on the hot blacktop, I set off to explore the Secret City (a.k.a. Oak Ridge.) Oak Ridge was established in 1942 by the U.S. Department of Energy as a laboratory for the Manhattan Project. It got its nickname of "Secret City" because the government kept its existence a secret, providing guard stations and fences to keep folks out. In addition, Oak Ridge didn't even appear on maps until 1949. 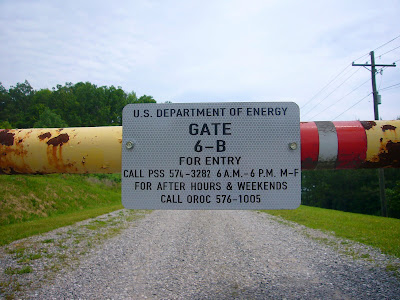 At present, Oak Ridge is no longer a secret, but it still has that eerie feeling of secrecy thanks to the numerous Dept. of Energy signs posted along abandoned roadways advising you to keep out. As I was exploring one of the many greenways within the city, I came upon the historic community of Wheat, TN. 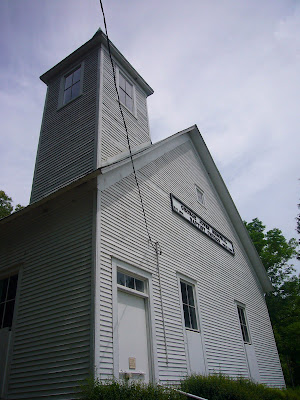 Wheat, TN was an old 1800s farming community that was displaced in 1942 when the Department of Energy bought up the land as part of the Manhattan Project. The only building still remaining is the 1901 George Jones church and the Wheat Community cemetery. I walked around the grounds of the cemetery and took special note of a gravestone carved to look like logs. On closer inspection, the grave marker indicated that the deceased was a member of the woodworker's industrial union. Who knows what other "secret" places exist in Oak Ridge. There were so many abandoned roads that were off limits to the public, and although they beckoned to my desire to explore, the thought of being jailed for trespassing on federal lands associated with nuclear weaponry stopped me dead in my tracks. Maybe next time....
Posted by Jessica Wilson at 11:28 AM