Land Between the Lakes

A few weeks ago, my mom and I got cabin fever and decided do some off-road bike riding. With the sun partially out, we choked down some Egg McMuffins and headed north to Kentucky and entered Land Between the Lakes. Here, there is a 11 mile mountain bike trail called the Canal Loop trail that appropriately borders the canal between Lake Barkley (Cumberland River) and Lake Kentucky (Tennessee River). 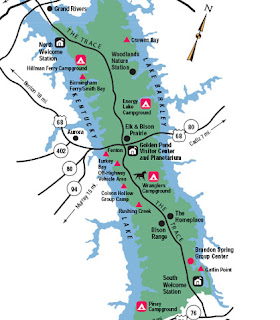 Mom had never mountain-biked before and quickly learned that it primarily consists of riding over roots and rocks, thus leading to inevitable scratches and bruises. However, I give the ole' gal props for mountain biking at nearly 60! Neither one of us ever fell, and enjoyed the adventure of riding in a new place. I can't say that I was enamored with the beauty of Land Between the Lakes- maybe it was having an off day, but it did have some good roads for bicycle riding, and was surprisingly hilly.

When we got done, we loaded our muddy bikes into the back of the truck and headed back towards TN. For some reason I got a jones for Arby's curly fries and we refused to stop until we found one- which was an hour later in Clarksville, TN (we were so happy we cheered). It just goes to show you that life's simple pleasures can be found working up a sweat followed by eating greasy curly fries.
Posted by Jessica Wilson at 4:50 PM

Email ThisBlogThis!Share to TwitterShare to FacebookShare to Pinterest
Labels: Land Between the Lakes