I'm finally getting around to post about the final two days of my week-long trip across Tennessee.

Thursday found us driving to Lynchburg, Grundy County, through Chattanooga, and on to Monroe County and Loudon, TN before settling for the evening in downtown Knoxville. Lynchburg was our first stop, and most of you know it as home to the Jack Daniels Distillery. I've been here twice and will post about it separately one of these days, but for obvious reasons we didn't stop here while on our business trip. Next, was Grundy County which is home to some of my favorite hikes in the Savage Gulf State Natural Area and South Cumberland State Park.

Later in the day, we drove over to Sweetwater, TN- home to the Lost Sea. I've never been to the Lost Sea, but it calls out to me with its fascinating history. It's listed in the Guinness Book of World Records as the largest underground lake in the United States. Over the years it has hosted cockfighting, an underground dance floor, and moonshining activities. I HAVE to return and visit one day. 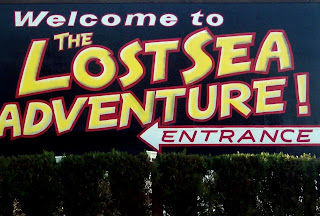 After a good night's sleep in Knoxville, we head out for Hawkins Co. and Grainger County in East Tennessee. Here, we drove through some of the most beautiful valleys and hills in the state, but I was definately itching to return home after spending a week on the road. Before we concluded our trip, however, we made one last stop to Bulls Gap so that Dr. Burton could show me an old abandoned hotel located right along a major rail line. The Gilley Hotel was built sometime in the late 1800s and used to be a place where visitors could hop off a train and get a room for the night. Many railroad workers stayed here for extended lengths of time as well. Currently, it is in major disrepair, but there are several parties interested in renovating it back into a hotel. Dr. Burton mused, "Imagine how cool it would be to sit out on the balcony with an ice cold beer in your hand while watching the trains pass by." (On the flip side, I imagine getting a good night's sleep would be next to impossible!) 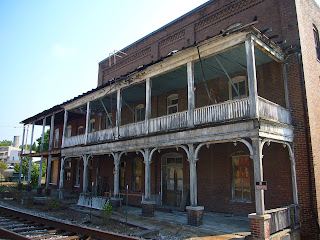 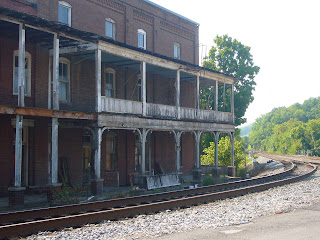 After our stop at Bulls Gap, I head back to Nashville and turn in the car I had been driving all week. Guess how many miles I logged over the week?? 1800!!! I suddenly felt like a long-haul trucker. And wouldn't you know as soon as I get home, Brian and I leave for a weekend trip to Atlanta.....
Posted by Jessica Wilson at 7:07 PM