Georgia Aquarium- A Trip to Atlanta 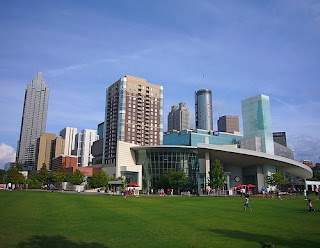 So I realize I'm straying once again from all things Tennessee by posting about the Georgia Aquarium in Atlanta, but my rationalization is that it makes a good weekend trip if you're looking to escape the Volunteer State for a day or two. Brian and I traveled to the Atlanta area over Labor Day in order to visit with his family and while we were there we checked out the Georgia Aquarium and adjoining Centennial Olympic Park.

We went on a Sunday afternoon about an hour and a half before closing and this seemed to be a really good time to avoid the crowds, yet it left us with enough time to truly enjoy our visit. The aquarium is divided up into several exhibit areas depending on climate, region, etc. There was a tunnel where visitors could walk underneath a whole sea of fish above them. We saw whale sharks, sting rays with leopard spots, and all sorts of schools of fish that would swim around and over us. 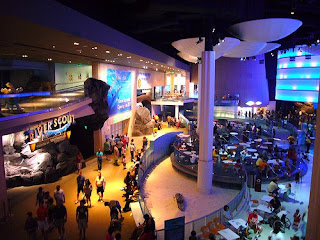 In other exhibits we saw playful otters (my personal favorite), as well as starfish, alligators, beluga whales, penguins, all kinds of colorful jellyfish, an octopus, and I even got to touch a sea anemone since there are several touch pools located throughout the aquarium. It was fun to see all the different kinds of animals and feel like a kid again. After we left the aquarium we stepped outside to the Olympic Centennial Park where all sorts of people were enjoying a game or football, strolling around, or just laying down reading a good book on a balmy evening. The mood was a far cry from the bombing that took place here during the '96 Summer Olympics. 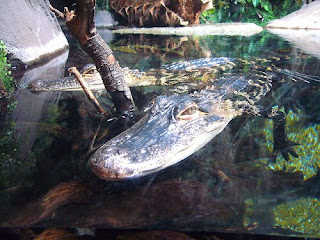 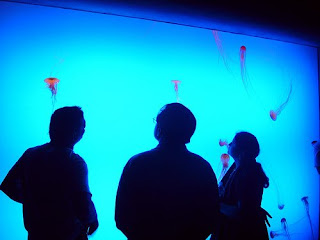 Before we left the park we sat down and watched several kids playing in the Fountain of Rings. It was fun to see the sheer delight on their faces as the water spouted out of the ground at irregular intervals. A grape sno-cone would have made the experience even more delightful. Across from the aquarium sits the World of Coca-Cola where you can sample over 60 types of products (I've heard that some of these products include Cokes from Around the World- just don't drink the Indian Coke if it was bottled in SE Asia since it was found to have unhealthy amounts of pesticides in it due to the bad water supply) I seriously doubt the World of Coca Cola advertises that tidbit. Anyhow, we didn't tour the Coke musuem since we arrived so late in the afternoon, but I hope to return one day since I'm an avid fan of Diet Coke. (I know- not good for you, but what is these days?) So, if you're in Atlanta for a couple of days and want to play the tourist, then you should check out the Georgia Aquarium.
Posted by Jessica Wilson at 6:43 AM