I'm finally getting around to posting about the tail end of our honeymoon in Mexico. In my last post, I ended before writing about Xel-Ha the Cultural Water Park, a.k.a. Tourist trap. Here- we planned on spending the afternoon snorkeling. That lasted about 5 minutes. Between the confusing life jackets, suffocating face mask, and snorkel that caused me to gag, we abandoned all hope of enjoying this activity and instead spent our time wandering aimlessly around the crowded park just praying for the time for our departure to draw nearer. We got stuck walking behind an annoying hippie who wouldn't shut up about the Grotto at the Playboy mansion. Who knows why....

Lastly, we attempted to relax on the isle of hammocks, but I quickly learned that I have the balance of a drunken fisherman as the hammock not-so-kindly spilled me out. When we finally got on the bus, we ended up in horrendous traffic due to construction. While Brian dozed off, I watched all the locals walk in the dark on the side of the highway and construction workers labor in the dark with nothing more than some cones lit up with tiny bulbs on the inside. This would definitely not occur in the U.S.- OSHA would throw a fit. 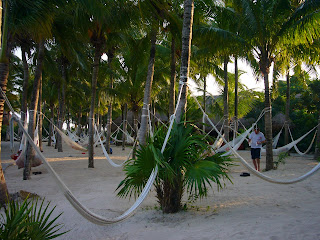 On Friday, our last full day, we spent the somewhat overcast day lounging around, but in the evening, a hotel shuttle took us into the fishing town of Puerto Morales where we ate dinner at a real Mexican restaurant and shopped for gifts. We ate at a place called Posada Amor and I had this yummy chicken enchilada thingy and Brian had chicken fajitas. When the waitress brought out our chips and salsa, we dug into the pico (Mexican salsa in this region is chunky and very unlike the saucy salsa that we get in Mexican restaurants here in the States). We wrongly assumed that the red chunks were tomatoes, when in fact they were extremely hot habanero peppers. Brian loved it and sweat with his meal.

Saturday morning we woke up and sadly began to pack. It was good to get home, but depressing to get on the plane and head to our layover in Chicago where the temperatures were in the 30s as opposed to the 80 degree weather we left hours earlier.

Over the next couple of weeks, we would ocassionaly catch a whiff of sunscreen from our laundered clothes and it was the most depressing feeling to know we were back in Tennessee, working the daily grind, and facing cold, wintery months ahead.
Posted by Jessica Wilson at 4:58 PM