Back in December on a semi-warm day, Brian and I drove out to Lock 4 in Gallatin where we met our friend Brad for a day of mountain biking. For those of you unfamiliar with Lock 4, it is not for the faint of heart or inexperienced. This is why I am crazy- it was the first time I've mountain biked, ever. To be fair though, I had no idea what I was getting myself into. I just thought I'd be riding in the woods along some nice even trails. Maybe, just maybe, there'd be a challenging hill or a low branch to watch out for. Little did I know I would cheat death several times and nearly destroy my bike in the process.

First of all, they have these things called whoop-de-do's, which are basically these deep U-shaped dips that causes a bike to often go airborne. I didn't get enough speed going before I hit the whoop-de-do, so I ended up almost getting to the top before gravity dragged myself backwards and I ended up back at the beginning. It was like something you would see in a cartoon. I spent the rest of the time getting off my bike and walking through the muddy whoop-de-dos. Below is an example of a Whoop-de-do, but isn't an actual picture of me or Brian: 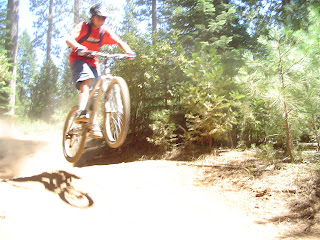 Also- did I mention that part of the bike trail runs along the edge of Old Hickory Lake? I almost learned this the hard way as I nearly lost control on a hill and tumbled into the icy-cold lake. Several times thoughout the ride, either Brian or me would let out a big "Ooph" as we fell (or ran into a tree) and hit the earth. Autumn leaves make for a nice padded fall. 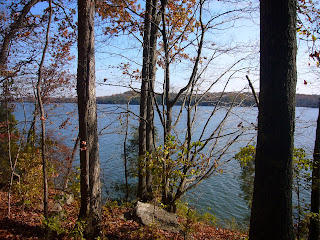 When we finished up and got back to the car, it was such a sense of accomplishment despite all the challenges and bruises. My reward for all our physical activity was stopping at the gas station and buying Pringles, Laughy Taffy, and a diet Coke, thus throwing out any calorie deficit that I accumulated throughout the day. I'll leave you with a picture of my mud-covered leg. 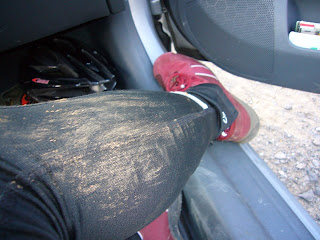 Posted by Jessica Wilson at 5:54 PM

Email ThisBlogThis!Share to TwitterShare to FacebookShare to Pinterest
Labels: Lock 4