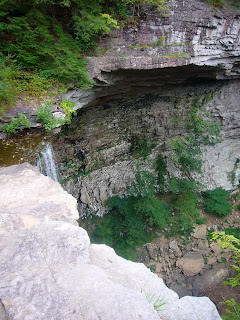 This weekend, Brian and I drove east to Knoxville to meet our new niece. On our way there we decided to take a short detour on Highway 70 in order to break up the monotony of Interstate driving.  We exited at the Crab Orchard exit just past Crossville, and joined up with Highway 70.  Just a few miles down the twisty road we came to our first roadside stop- Ozone Falls.   Ozone Falls is a 110' waterfall that plunges into a swimming hole and eventually flows underground further up the stream.  Apparently, it was also used as the backdrop for the Disney film, The Jungle Book.  From the parking lot, you walk just a few feet to the top of the falls, but because of the large rock outcroppings, you can't get a good view unless you stand on the edge (which I do not recommend if you have poor balance or are afraid of heights- this is also the reason why I don't have a good picture of the falls).  However, if you choose to walk the 2/3rd of a mile to the base of the falls, then be sure to wear good shoes.  Since we were on a casual road trip, and I was wearing sandals, we opted not to walk down to the base since it appeared that scrambling over boulders was a requirement to get to the bottom.  While we were there, we also noticed this creepy hybrid monkey-baby placed in a tree.  From the bottom of the falls, we heard a child's voice repeatedly yell out, "Daddy!"   I assumed it was just a family enjoying some swim time, but maybe it was the lonely cries of the monkey-baby.


Next stop was Roosevelt Mountain, a wildlife management area in Rockwood, TN with a great view of the valley below.  I'd always seen the mountain from the interstate- it's hard to miss since its topped with cell phone/TV towers, as well as a now-rotting wooden fire tower that was built by the CCC during the Great Depression.  While the view is certainly impressive, the mountain top is absolutely littered with graffiti; likely put there by bored teens who go there to drink and smoke cigarettes at night.  Definitely not a place where I'd go to seek solitude. 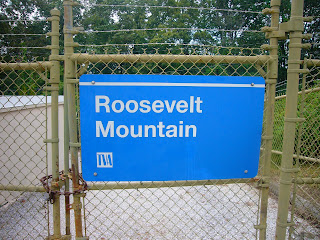 Posted by Jessica Wilson at 6:08 PM