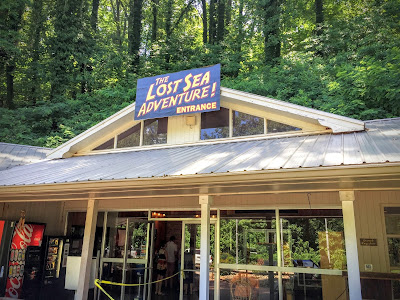 In between Sweetwater and Madsonville in East Tennessee you'll find The Lost Sea, a cave that contains the world's 2nd largest lake. The cave system itself was known originally as Craighead Caverns, but the discovery of the lake in the early 1900s lead to what the world would know the cave as: The Lost Sea (or, at least according to the signage, The Lost Sea Adventure!). It existed for many years as the largest known underground lake in the world until it was unceremoniously beaten out by a cave called the Dragon's Breath Cave in Africa. I would like to think the Lost Sea wanted to put up a fight to defend their title, but who would want to mess with a cave with a name like that? So they've settled on the still awesome title of "World's 2nd Largest Underground Lake". It's also listed in the Guinness Book of World Record's as America's largest underground lake.


The 3/4s of a mile long tour starts off within an entrance building that contains a manmade tunnel that slopes down in to the natural cave below. The cave tour is a mixture of walking passage and the actual boat ride itself. The cave features large rooms and some formations, along with some Civil War era signatures on the walls and ceilings as well as artifacts from saltpeter mining. In the entrance building you can see the remains of a jaguar that was discovered in the 1830s. Here are a few photos from the walking tour:

The highlight of the tour is, as you can imagine, the boat ride on the lake. There's a slightly surreal aspect to the whole thing. There's a full blown boat dock here with 3-4 boats tied up to it and the lake room extends on for four and a half acres. The ceiling is relatively low over the lake, and periodic lights in the water provide the only illumination. The vast majority of the lake is not accessible by boat and can only be reached by divers who can access the remaining parts of the lake under the water. The story goes that no diver has been able to reach the end of the lake so far.

Stocked in the lake are, and I'm not making this up, rainbow trout. I have no idea why the owners thought it was necessary to stock the lake with fish other than it was an added draw to the tourist attraction. The rainbow trout are not naturally found in the cave, so it was done purposely. The boats do feature glass bottoms that were pretty murky to see through. I don't recall seeing a single fish pass under the boat but you can see plenty in the water around the boat. No fishing is allowed either.

On our tour there were a number of guests who questioned why the trout were being kept in the lake. The tour guide was very supportive of the idea, stating that the lake was free from natural predators and thus they could live a much longer life than they could on the surface. Plus they have a consistent food supply they have dubbed "trout chow". Obviously, there are mixed feelings amongst guests as to the role of these fish outside their natural environment.

There are also wild cave tours available and there are some additional things to do on the property like gem mining, glass blower, a blacksmith shop, a wishing well, and a sweet shop that will give you a cavity just from a whiff of the treats inside. There is also a nature trail you can hike to burn off some of those calories.

This is my second time seeing the Lost Sea and I still enjoyed the tour. The main building that houses the tunnel entrance is in need of some repairs (the bathrooms were in pretty rough shape). I'm hoping this is not an overall sign of how business is going for them. The tours were full of people, though, and they run them continuously so at least on this day business was good. It's important to note that during times of extreme drought the water levels in the lake will drop low enough to cause them to suspend boat tours. I believe there's only been one drought in recent memory where they had to stop tours.

If you find yourself traveling between Chattanooga and Knoxville, I would recommend getting off in Sweetwater and following the signs for The Lost Sea. It's definitely worth at least one trip to experience the large underground lake. For more information about The Lost Sea, you can check out their website here.