Rising 5,385 feet above sea level, Wayah Bald offers a spectacular view of the Blue Ridge Mountains in Southwestern North Carolina. Perched on top of this grassy bald is the Wayah Bald Observation Tower, built by the Civilian Conservation Corp in 1937, and it offers the best views of the surrounding mountains.


The Appalachian and Bertram Trails cross here, so expect to see many backpackers enjoying the views at the top. It's hard not to feel like lazy tourists strolling up to the tower with no packs on our backs, clearly having just gotten out of our car, but in all fairness we had hiked 12 mountainous miles the previous day.


Wayah Bald is accessible from the appropriately named Wayah Road, a winding 2-lane mountain road that runs from Franklin, NC to the beautiful Nantahala Gorge. Once you reach Wayah Gap, turn on to the gravel access road that winds its way further up towards the bald. The gravel road is accessible by 2-wheel drive cars, but if it's raining traction could get a little slippery.


About half way up you'll pass the Wilson Lick Ranger Station. The ranger station was built back in 1916 and it's an impressive wood structure still standing today. You can actually walk the Appalachian Trail 3 miles uphill to the observation tower from here. Apparently this is how the rangers did it back in the day. How about that for your morning commute?

Back down on Wayah Road traveling west will take you to pretty Nantahala Lake. Here a pump station feeds the Nantahala River as it begins its descent down to the Nantahala Gorge (I'm paid by the Nantahala in this article). Along the way the river spills over numerous cascades and waterfalls. There are multiple places to stop and sit by the fast moving water (assuming the pump station is operating, which is mostly every day during daylight hours). Take a few moments to absorb some ions. This part of the river is known as the Upper Nantahala River and it's a Class IV+ river. You can occasionally see experienced kayakers tackling these cascades and rapids. Wayah Road ends at US 74. Take a right to continue down the gorge.

The gorge is home to Class II whitewater rafting and the popular Nantahala Outdoor Center. You can rent inflatable duckies (a lot of fun) or take a guided tour on a traditional whitewater raft. As mentioned before, the river is controlled by the pump station and the river exits at the very bottom of the lake which makes the water VERY cold. It can be dead of summer and 100 degrees out and you'll still see people wearing cold water gear.

A few years ago Jessica and I rented some duckies and loved the ride down the river. It was astormy day and there was thunder and lightning which heightened the experience. (Note: it's probably NOT advisable to raft down the river in a thunderstorm). Along the gorge there are other rafting outfitters, as well as several restaurants to eat at (several have riverside views). One of our favorites is actually at the NOC. It's called River's End. There is also a BBQ place just on the other side of the river still on the NOC grounds. 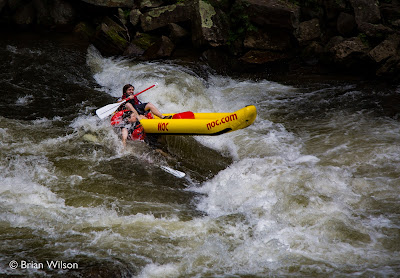 There are also several places to watch the rafters as they go down the river. In particular, check out the parking area just south of the NOC where you can watch rafters head over the Lesser Wesser Falls (the highest rated rapids on this part of the river). It is common to see people part company with their boats here. 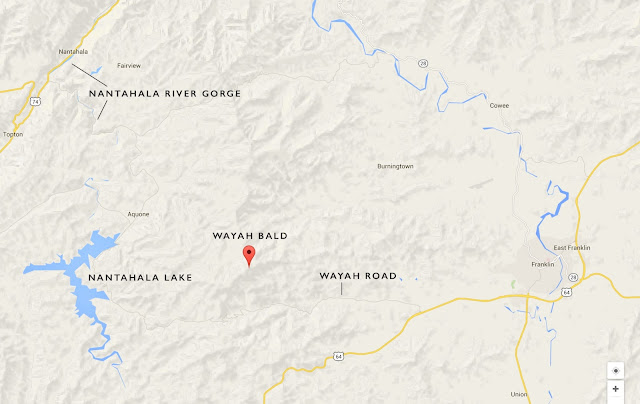 Wayah Bald and the Nantahala River Gorge are located approximately 90 minutes from Gatlinburg, TN and Asheville, NC. It's definitely worth a side trip if you find yourself in the area. For more information about Wayah Bald, check out the USDA Forest Service's page here.
Posted by Brian Wilson at 1:50 PM